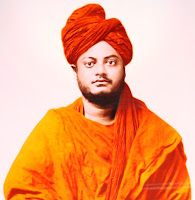 Swami Vivekananda was a great devotee of Sri Rama, the seventh incarnation of Lord Vishnu. Sri Ramakrishna, his Guru initiated him with Rama mantra. After returning from the West he met Sri Sarada Devi, the spiritual consort of Sri Ramakrishna and told her: "Mother in this Yuga instead of leaping over the sea (referring to his role as Hanuman's during Sri Rama Avatar) I have traveled to the country by ship of their own."
Swamiji delivered this talk on 'The Ramayana' at the Shakespeare Club, Pasadena, California, USA on 31st January, 1900. It is posted on the occasion of Rama Navami which falls on 1st April 2012.

RAMAYANA: PART-I
There are two great epics in the Sanskrit language, which are very ancient. Of course, there are hundreds of other epic poems. The Sanskrit language and literature have been continued down to the present day, although, for more than two thousand years, it has ceased to be a spoken language. I am now going to speak to you of the two most ancient epics, called the Râmâyana and the Mahâbhârata. They embody the manners and customs, the state of society, civilisation, etc., of the ancient Indians. The oldest of these epics is called Ramayana, "The Life of Râma". There was some poetical literature before this — most of the Vedas, the sacred books of the Hindus, are written in a sort of metre — but this book is held by common consent in India as the very beginning of poetry.

The name of the poet or sage was Vâlmiki. Later on, a great many poetical stories were fastened upon that ancient poet; and subsequently, it became a very general practice to attribute to his authorship very many verses that were not his. Notwithstanding all these interpolations, it comes down to us as a very beautiful arrangement, without equal in the literatures of the world.

There was a young man that could not in any way support his family. He was strong and vigorous and, finally, became a highway robber; he attacked persons in the street and robbed them, and with that money he supported his father, mother, wife, and children. This went on continually, until one day a great saint called Nârada was passing by, and the robber attacked him. The sage asked the robber, "Why are you going to rob me? It is a great sin to rob human beings and kill them. What do you incur all this sin for?" The robber said, "Why, I want to support my family with this money." "Now", said the sage, "do you think that they take a share of your sin also?" "Certainly they do," replied the robber. "Very good," said the sage, "make me safe by tying me up here, while you go home and ask your people whether they will share your sin in the same way as they share the money you make." The man accordingly went to his father, and asked, "Father, do you know how I support you?" He answered, "No, I do not." "I am a robber, and I kill persons and rob them." "What! you do that, my son? Get away! You outcast! "He then went to his mother and asked her, "Mother, do you know how I support you?" "No," she replied. "Through robbery and murder." "How horrible it is!" cried the mother. "But, do you partake in my sin?" said the son. "Why should I? I never committed a robbery," answered the mother. Then, he went to his wife and questioned her, "Do you know how I maintain you all?" "No," she responded. "Why, I am a highwayman," he rejoined, "and for years have been robbing people; that is how I support and maintain you all. And what I now want to know is, whether you are ready to share in my sin." "By no means. You are my husband, and it is your duty to support me."

The eyes of the robber were opened. "That is the way of the world — even my nearest relatives, for whom I have been robbing, will not share in my destiny." He came back to the place where he had bound the sage, unfastened his bonds, fell at his feet, recounted everything and said, "Save me! What can I do?" The sage said, "Give up your present course of life. You see that none of your family really loves you, so give up all these delusions. They will share your prosperity; but the moment you have nothing, they will desert you. There is none who will share in your evil, but they will all share in your good. Therefore worship Him who alone stands by us whether we are doing good or evil. He never leaves us, for love never drags down, knows no barter, no selfishness."

Then the sage taught him how to worship. And this man left everything and went into a forest. There he went on  praying and meditating until he forgot himself so entirely that the ants came and built ant-hills around him and he was quite unconscious of it. After many years had passed, a voice came saying, "Arise, O sage! " Thus aroused he exclaimed, "Sage? I am a robber!" "No more 'robber'," answered the voice, "a purified sage art thou. Thine old name is gone. But now, since thy meditation was so deep and great that thou didst not remark even the ant-hills which surrounded thee, henceforth, thy name shall be Valmiki — 'he that was born in the ant-hill'." So, he became a sage.

And this is how he became a poet. One day as this sage, Valmiki, was going to bathe in the holy river Ganga, he saw a pair of doves wheeling round and round, and kissing each other. The sage looked up and was pleased at the sight, but in a second an arrow whisked past him and killed the male dove. As the dove fell down on the ground, the female dove went on whirling round and round the dead body of its companion in grief. In a moment the poet became miserable, and looking round, he saw the hunter. "Thou art a wretch," he cried, "without the smallest mercy! Thy slaying hand would not even stop for love!" "What is this? What am I saying?" the poet thought to himself, "I have never spoken in this sort of way before." And then a voice came: "Be not afraid. This is poetry that is coming out of your mouth. Write the life of Rama in poetic language for the benefit of the world." And that is how the poem first began. The first verse sprang out of pits from the mouth of Valmiki, the first poet. And it was after that, that he wrote the beautiful Ramayana, "The Life of Rama".

There was an ancient Indian town called Ayodhyâ — and it exists even in modern times. The province in which it is still located is called Oudh, and most of you may have noticed it in the map of India. That was the ancient Ayodhya. There, in ancient times, reigned a king called Dasharatha. He had three queens, but the king had not any children by them. And like good Hindus, the king and the queens, all went on pilgrimages fasting and praying, that they might have children and, in good time, four sons were born. The eldest of them was Rama.

Now, as it should be, these four brothers were thoroughly educated in all branches of learning. To avoid future quarrels there was in ancient India a custom for the king in his own lifetime to nominate his eldest son as his successor, the Yuvarâja, young king, as he is called.

Now, there was another king, called Janaka, and this king had a beautiful daughter named Sitâ. Sita was found in a field; she was a daughter of the Earth, and was born without parents. The word "Sita" in ancient Sanskrit means the furrow made by a plough. In the ancient mythology of India you will find persons born of one parent only, or persons born without parents, born of sacrificial fire, born in the field, and so on — dropped from the clouds as it were. All those sorts of miraculous birth were common in the mythological lore of India.

Sita, being the daughter of the Earth, was pure and immaculate. She was brought up by King Janaka. When she was of a marriageable age, the king wanted to find a suitable husband for her. There was an ancient Indian custom called Svayamvara, by which the princesses used to choose husbands. A number of princes from different parts of the country were invited, and the princess in splendid array, with a garland in her hand, and accompanied by a crier who enumerated the distinctive claims of each of the royal suitors, would pass in the midst of those assembled before her, and select the prince she liked for her husband by throwing the garland of flowers round his neck. They would then be married with much pomp and grandeur. There were numbers of princes who aspired for the hand of Sita; the test demanded on this occasion was the breaking of a huge bow, called Haradhanu. All the princes put forth all their strength to accomplish this feat, but failed. Finally, Rama took the mighty bow in his hands and with easy grace broke it in twain. Thus Sita selected Rama, the son of King Dasharatha for her husband, and they were wedded with great rejoicings. Then, Rama took his bride to his home, and his old father thought that the time was now come for him to retire and appoint Rama as Yuvaraja. Everything was accordingly made ready for the ceremony, and the whole country was jubilant over the affair, when the younger queen Kaikeyi was reminded by one of her maidservants of two promises made to her by the king long ago. At one time she had pleased the king very much, and he offered to grant her two boons: "Ask any two things in my power and I will grant them to you," said he, but she made no request then. She had forgotten all about it; but the evil-minded maidservant in her employ began to work upon her jealousy with regard to Rama being installed on the throne, and insinuated to her how nice it would be for her if her own son had succeeded the king, until the queen was almost mad with jealousy. Then the servant suggested to her to ask from the king the two promised boons: one would be that her own son Bharata should be placed on the throne, and the other, that Rama should be sent to the forest and be exiled for fourteen years.

Now, Rama was the life and soul of the old king and when this wicked request was made to him, he as a king felt he could not go back on his word. So he did not know what to do. But Rama came to the rescue and willingly offered to give up the throne and go into exile, so that his father might not be guilty of falsehood. So Rama went into exile for fourteen years, accompanied by his loving wife Sita and his devoted brother Lakshmana, who would on no account be parted from him.

Email ThisBlogThis!Share to TwitterShare to FacebookShare to Pinterest
Labels: ramayana