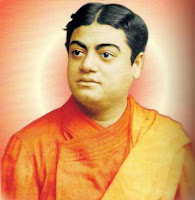 Once when I was in Varanasi, I was passing through a place where there was a large tank of water on one side and a high wall on the other. It was in the grounds where there were many monkeys. The monkeys of Varanasi are huge brutes and are sometimes surly. They now took it into their heads not to allow me to pass through their street, so they howled and shrieked and clutched at my feet as I passed. As they pressed closer, I began to run, but the faster I ran, the faster came the monkeys and they began to bite at me. It seemed impossible to escape, but just then I met a stranger who called out to me, "Face the brutes." I turned and faced the monkeys, and they fell back and finally fled. That is a lesson for all life — face the terrible, face it boldly. Like the monkeys, the hardships of life fall back when we cease to flee before them. If we are ever to gain freedom, it must be by conquering nature, never by running away. Cowards never win victories. We have to fight fear and troubles and ignorance if we expect them to flee before us.

Email ThisBlogThis!Share to TwitterShare to FacebookShare to Pinterest
Labels: ANECDOTE