ANECDOTE: A LESSON ON SAME SIGHTEDNESS:

Once Swami Vivekananda [Swamiji] was staying as King Ajit Singhji’s guest at the Khetri Palace. One evening the king invited Swamiji to join him to hear songs sung by a professional dancing girl. But Swamiji refused and sent a message that as a sannyasin it was against his principles to attend such party.

When the singer heard this she was deeply grieved. She started to sing, as it were reply, a song of a Saint. The girls’ sweet, plaintive voice reached the sensitive ears of Swamiji. The meaning of the song: ‘O Lord, look not upon my evil qualities. Thy name, O Lord, is same sightedness. One piece of iron is in the image in the temple, and another in the butcher’s hand. But when they touch the philosopher’s stone, both alike turn into gold. So Lord, look not upon my evil qualities.’ 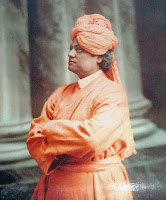 The song touched Swamiji’s heart deeply. He soon reproached himself, muttering ‘What sort of a sannyasin am I that I still distinguish women from myself?’ The song taught him a great lesion. He realized he could not reject anyone, for in all lies the same Self.

Swamiji then rushed to the music room and listened to the song. He addressed the woman as ‘Mother’ and begged her pardon for his discourteous behavior.


SOURCE: Swami Vivekananda, The Friend of All, by RKM, Institute of Culture, Kolkata