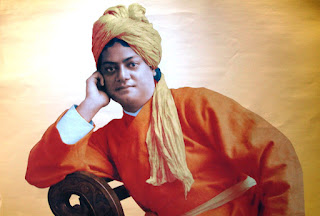 After a time he had to go to the town to beg his bread. He went, stood at a door, and said, "Mother, give me food." A voice came from inside the house, "Wait a little, my son." The young man thought, "You wretched woman, how dare you make me wait! You do not know my power yet." While he was thinking thus the voice came again: "Boy, don't be thinking too much of yourself. Here is neither crow nor crane." He was astonished; still he had to wait.

At last the woman came, and he fell at her feet and said, "Mother, how did you know that?" She said, "My boy, I do not know your Yoga or your practices. I am a common everyday woman. I made you wait because my husband is ill, and I was nursing him. All my life I have struggled to do my duty. When I was unmarried, I did my duty to my parents; now that I am married, I do my duty to my husband; that is all the Yoga I practice. But by doing my duty I have become illumined; thus I could read your thoughts and know what you had done in the forest. If you want to know something higher than this, go to the market of such and such a town where you will find a Vyâdha (The lowest class of people in India who used to live as hunters and butchers.) who will tell you something that you will be very glad to learn." The Sannyasin thought, "Why should I go to that town and to a Vyadha?" But after what he had seen, his mind opened a little, so he went.
When he came near the town, he found the market and there saw, at a distance, a big fat Vyadha cutting meat with big knives, talking and bargaining with different people. The young man said, "Lord help me! Is this the man from whom I am going to learn? He is the incarnation of a demon, if he is anything." In the meantime this man looked up and said, "O Swami, did that lady send you here? Take a seat until I have done my business." The Sannyasin thought, "What comes to me here?" He took his seat; the man went on with his work, and after he had finished he took his money and said to the Sannyasin, "Come sir, come to my home."

On reaching home the Vyadha gave him a seat, saying, "Wait here," and went into the house. He then washed his old father and mother, fed them, and did all he could to please them, after which he came to the Sannyasin and said, "Now, sir, you have come here to see me; what can I do for you?" The Sannyasin asked him a few questions about soul and about God, and the Vyadha gave him a lecture which forms a part of the Mahâbhârata, called the Vyâdha-Gitâ. It contains one of the highest flights of the Vedanta. When the Vyadha finished his teaching, the Sannyasin felt astonished. He said, "Why are you in that body? With such knowledge as yours why are you in a Vyadha's body, and doing such filthy, ugly work?" "My son," replied the Vyadha, "no duty is ugly, no duty is impure. My birth placed me in these circumstances and environments. In my boyhood I learnt the trade; I am unattached, and I try to do my duty well. I try to do my duty as a householder, and I try to do all I can to make my father and mother happy. I neither know your Yoga, nor have I become a Sannyasin, nor did I go out of the world into a forest; nevertheless, all that you have heard and seen has come to me through the unattached doing of the duty which belongs to my position."